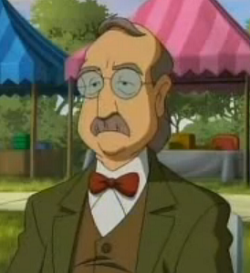 Vincent Van Helsing is the Van Helsing descendent in Scooby-Doo! Music of the Vampire. He states that his family has been in the vampire business for a long time, so he became a vampirologist. He is also a novelist. His books by his admission are based in fact and in old-school vampire lore, and are not like more modern, romantic tales. He lives in a mansion in the town of Petit Chauve Sourie Ville, which also houses a vampire museum.

Unfortunately, despite being the world's most renowned authority on vampires, his books are not selling well, and he has to rent his property out to host the Vampire Palooza festival in order to get by. The festival sadly has not been faring well either, and Van Helsing feared he wouldn't be able to save his family's legacy.

However, with the arrival of the Mystery Inc., the town was besieged by an ancient vampire called Valdronya, who supposedly had been encased in glass in Van Helsing's museum. The tomb is still sealed, but a jeweled necklace and tiara in the museum that purportedly belonged to a vampire's bride centuries ago were stolen.

When Daphne is kidnapped, Van Helsing joines Fred and Velma in search of her, but is pulled off the boat and disappears. After Valdronya is defeated, he is unmasked as none other than Van Helsing himself. He confesses he was trying to save his family's legacy (as well as increase tourists to his museum and sales of his books) by staging a vampire wedding. He used a stolen pair of hover boots to fly, and knockout gas to mesmerize people, and duped a troupe of actors devoted to the vampire way of life into helping him with the promise of becoming real vampires. He is subsenquently arrested.

Retrieved from "https://vanhelsing.fandom.com/wiki/Vincent_Van_Helsing?oldid=4417"
Community content is available under CC-BY-SA unless otherwise noted.